The Return, Some Deeper Wisdom

Consider the Returns you’ve made in life. Coming back home after the first year of college. Going back to that favorite vacation spot. Seeing an old friend again. Going on military leave. Walking over the home threshold after a long absence. Going back to school after summer break.

Anticipation. Excitement. Nervousness. Maybe dread. The arrival is quickly followed by another range of emotions. Maybe relief or happiness. Maybe dissonance. Because something has changed. And that something isn’t necessarily the place. It’s you.

The wisdom on the Return from the Hero’s Journey is deeply powerful. Here you go.

First, usually a Refusal. Because we’ve received some kind of Initiation in our journey, acquired some depth and experience, we hesitate ‘going back’ to the ordinary world. There’s often a ‘lineage of lingering’ in the stories. Prince Arjuna must be convinced by Lord Krishna to go fight. Hamlet waffles for days, deepening the existential inquiry. Eventually, we must move on and cross the return threshold.

I have two ideas here. First, see your level of Refusal and work with it. Staying at home forever might not be that interesting, purposeful, or even possible. Second, we are not going back to the previously ordinary world. Hopefully you’ve already grieved that. We are moving on to new structures and perspectives that we get to create. That’s pretty cool, which might help negotiate any feelings of Refusal.

In the stories, our heroes often need help returning, often a Rescue or Magic Flight. E.T. raising loyal boys on bicycles. We don’t have flying carpets or a wizard with eagles; however we do have each other. In this story especially where many people feel isolated, we must reach out in all ways: asking for and receiving help.

Next, after crossing the Return Threshold, is one of the most useful things I’ve learned from this paradigm. Joseph Campbell called it Master of Two Worlds and Freedom to Live: inhabit the wisdom of your initiation and live in the world. Get to work and use your newly gained power in service to the world. Think Mother Theresa feeding the ill and homeless in Calcutta. Movie stars becoming goodwill ambassadors and doing relief work. Jimmy Carter building houses with Habitat for Humanity, even at 95. Doctors Without Borders.

This has been a guiding principle for me personally. Do your work and be yourself. Get over yourself and get back to work. Study your heart’s desires then share it with others. If it seems impossible or too much of something, that indicates the path.

It isn’t all beauty and bling, there’s also the dissonance. Suspicious looks from the neighbors who didn’t leave, the deep separation veterans feel, college freshman feeling smarter than the ones who stayed. Poet David Whyte says it beautifully,

revelation must be terrible
knowing you can
never hide your voice again.

It’s an Include and Transcend–integrate the discomfort into strength and authenticity: that’s wisdom.

There’s usually some kind of Celebration or appreciation. An honoring. It might be fancy like a princess putting a medal around some rogue mercenary winking at her. It’s usually small and sweet, hobbits raising mugs of ale. A kiss or hug. Welcome home. Now what shall you do with yourself?

There you go. We know the script. So let’s do this with kindness, acceptance, and blessings all around.

Watch my Video on the Return here.

Click here for a larger, printable version of the map. 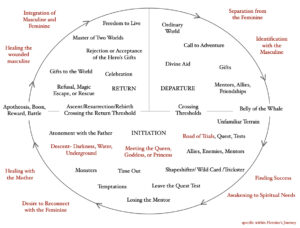