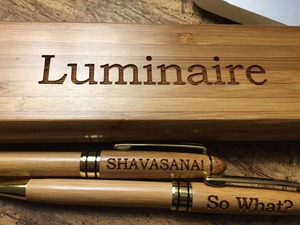 Jayme was being both supportive and mischievous with this sabbatical farewell gift. “You’re doing research. You’ll need pens.”

Maybe she knew I needed a big shove to lie down in Shavasana. Maybe she wanted to make me laugh~ So What?  Maybe she just wanted to give love. What she didn’t intend or imagine is how that pen set became a touchstone.

It was always getting moved from bag to desk. It’s pretty, so I’d admire it. It’s useful, so I felt compelled to use the pens. I wanted to thank

Jayme, so I sent pen-traveling pictures.

Every time, I had to see the case. Luminaire. Well, darn it. I was trying to rest, get away, find some direction, maybe even permanently lose myself in a New England library vault. Luminaire kept winking at me every day, so Jayme’s gift became a unexpected tether.

Since I’m reading Thoreau, I’ll give you 2 more examples from Henry. You may recall the famous incident where he refused to pay a war tax and went to jail. He willingly went—he knew the tax collector and jailor Sam Staples, who offered to pay it himself. Thoreau chose jail. A family member paid that evening, but Staples had already removed his boots for the day.

As a result, Thoreau wrote Civil Disobedience, a fiery call to live according to your conscience. Here’s the ripple part. He was deeply influenced by the philosophy and spirituality in Indian Scriptures. He was also a passionate abolitionist. Other than occasional lectures and letters criticizing slavery, he had little influence in his day. But look who he did influence. He had no idea that some Indian guy, Mahatma Gandhi, would find inspiration from that little essay. He had no idea that our country would take another 100 years and a Dr. King to do the same. All from protesting a tax and following your neighbor to a jail cell, Henry brought imm 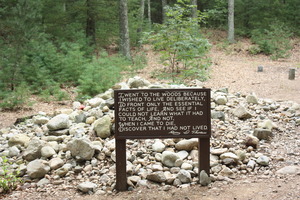 easurable progress to the descendants of the very people he admired and supported.

The other example you can see in the picture. Walden has been translated into over 200 languages, which has rippled Big-Time back the Pond, where countless people visit and leave stones. Pilgrimage.

I’m not asking us to walk around being super conscious of this. I do think we have a responsibility to cultivate the attitudes and behaviors we wish to ripple.

Appreciation is always a good place to start. It might give someone the hope they need to keep going. Like a simple pen set. Every day, what we think, say, and do matters. Make it kind, true, and fearless.