What to Look For in ‘The Pond in Winter’

In case you’re still unsure what we mean by this whole Walden as Mythology notion, welcome to The Pond in Winter.

The first third of the chapter is a lyrical homage to the pond, again, including an experiential morning with Thoreau as he goes out for his morning pail of water. You might wonder why he doesn’t acquire a pail in the evening to be warmed up overnight in the house. That would deprive us of the morning excursion and all its observations.

Next up is his survey of the pond. No one hired or paid him—-it’s an act of pure curiosity and love. He proves the pond has a bottom, satisfying the empiricist in Thoreau. He still maintains the value of the idea, “I am thankful that this pond was made deep and pure for a symbol. While men believe in the infinite some ponds will be thought to be bottomless.” He then weaves the pond as a symbol of harmony into a discourse on laws of nature and ethics. He argues that our understanding of such laws is limited to our capacity to observe. A pond bottom, another side of a mountain, and unproven laws of nature exist although we cannot see or understand them. 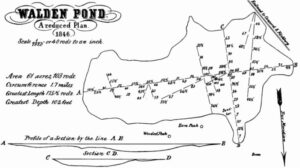 Next up is a fascinating account of ice harvests on the Pond. An ice trade war was taking place in the mid-1840’s when Thoreau was living at the pond. When the craze of harvesting ice was over, much of the unused ice was left to melt by the shore.

We may be bemused by Thoreau’s statement that the ice was “divided into cakes by methods too well known to require description.” He did write and remove this description, which is available in annotated editions.

Thoreau concludes by connecting some of his favorite Hindu scriptures to the ice, which was indeed shipped to cities in India.

A fear-naught is a heavy winter coat.
A fifty-six is a 56-pound iron weight.